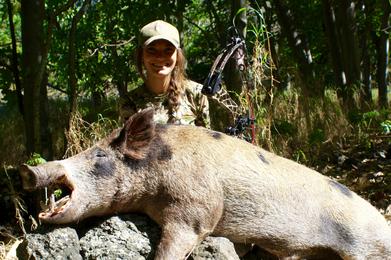 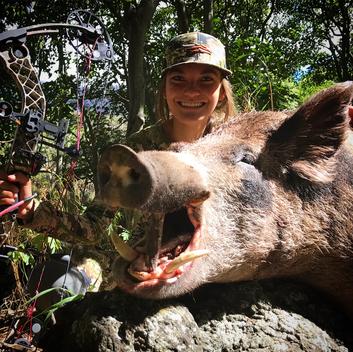 The grass moved in front of me. Twigs broke. I heard a grunt followed by the sound of tusk sharpening.

He was coming. “It had to be him,” I thought. I’ve been watching a blonde boar with black spots in this area all summer, but it never gave me a shot.

I straightened my Sitka facemask, pulling it above my nose. This was my chance. Shaking, I slowly reached for an arrow from my quiver, trying to be as quiet as possible. The grass continued to move and the grunts continued to get closer.

In the dry brown grass in front of me, I saw a snout poke out, with 180 pounds of boar to follow. There he was. The boar I had been watching all summer was coming straight towards me rooting at the ground, not noticing me hiding in the brush.

I reached for my range finder at my side and ranged him. 28 yards.

My heart began to beat against my chest. It was so loud that I thought the boar could hear it too. He stopped again still facing in my direction, but focused on the ground at his hooves.

I knew he had to turn broad side. I locked my arrow into place and placed my release onto the notch loop. He took a few steps to his right still looking at the ground.

Taking a deep breath in, I drew back my bow and found my anchor point. I rested my release against my cheek.  I tried to focus on my breathing, slowly getting my heart rate to slow down. I focused in on the boar in my sites.

“Just a few more steps,” I thought. I was at full draw for only a few seconds, but it felt like hours. He slowly turned to his right giving me a broadside shot.

I nestled my twenty-yard pin right behind his shaggy blonde shoulder. I waited for the morning wind to come to a small pause. As I exhaled, I let my arrow fly.

The sound of my arrow hitting his shield was followed by a roar. The boar rushed back into the tall grass. I knew I hit him, and felt comfortable with my shot.

Knowing I had to give it sometime, two hours later I returned to where I shot. There was a trail of blood leading into the grass. There was blood on both sides of the thick brush, so I knew my muzzy broad head had to have gone through.

As I followed blood, I soon came upon my arrow. I kept walking, following the blood trail. I was now about forty yards from where I originally shot. I looked ahead under a large Kukui Nut tree. Then I saw his massive body lying lifeless on his side in the tall grass.

I breathed out a sigh of relief, I did it! I harvested my first boar with my Matthews Chill SDX!